In a week of tragic wildfires and smoky skies, Chef Ken Tominaga offered a break for companionship and cooking at Fresh Starts Chef Events. 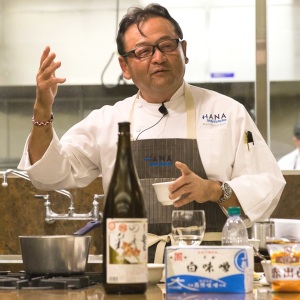 Chef Ken fed dozens of firefighters and police officers from his renowned Rohnert Park restaurant, Hana, in the aftermath. He nevertheless pledged immediately to appear at the benefit event as scheduled. “My family is okay, my house is okay and my restaurant is okay, so I want to be here,” he said.

Originally from Tokyo, the chef opened Hana in 1990 and, over the ensuing years, the restaurant became one of the region’s best-rated spots for Japanese food. He recently joined Chef Michael Mina to open restaurants in San Francisco, Boston, and Hawaii.

In addition to his training in Tokyo, Chef Ken visited celebrated sushi spots in the city in search of “secrets” from top chefs. He got them, he says, by promising that he wouldn’t be a competitor since he would be making and serving sushi in California. 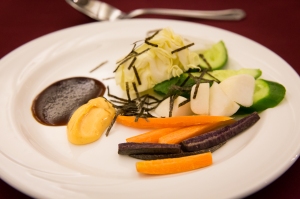 Chef Ken’s recipes use many ingredients that aren’t found at typical grocers, but most are easily purchased in Japanese markets or online. Unlike home cooks, though, he brings in his fresh fish from Tokyo.

The first dish in his demonstration, Akadashi with Nameko Mushrooms, offered lots of room to explain differences in miso he uses, what dashi broth is and how to make it. The sansho pepper in the recipe is a garnish, he pointed out, not a substitute for black pepper – and too much will numb your mouth.

The shirodashi, a concentrated dashi broth, and two types of miso set this soup apart 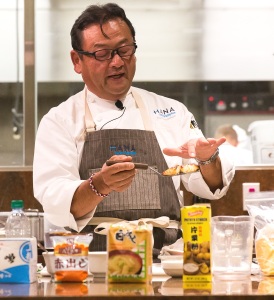 from most served in Japanese restaurants. Although he provided a recipe, Chef Ken said, “I want you to play with (different ingredients) on your own.” He suggested adding crab or varying the mushrooms. Sebastopol’s Mycopia provided the Nameko mushrooms and has several varieties available.

Though Chef Ken made it look easy, the Miso-Glazed Black Cod with Crispy Rice in Asari Dashi Broth required several steps. First, the dish needs advance consideration as the fish marinates for two to three days. The chef says any oily fish can be used, as can chicken or pork, which only need to be marinated overnight. 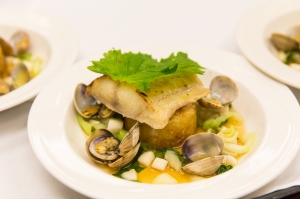 He broiled the black cod, cooked the clams in dashi broth and prepared the rice cake separately, then prepared the dipping sauce and finally combined the elements for an excellent dish.

Like many chefs, Chef Ken generally doesn’t dabble in desserts, leaving that task at Hana in the hands of his wife. Chef Ken offered one of her creations: Matcha Panna Cotta, Coffee Jelly & Vanilla Gelato, which was unusual, refreshing and delicious.

To accompany the meal, guests enjoyed Sequoia Sake‘s Nama, a fresh version from the San Francisco maker, along with iced tea from The Republic of Tea, premier sponsor of Fresh Starts Chef Events. — Contributed by Carol Inkellis with photos by Neely Wang. 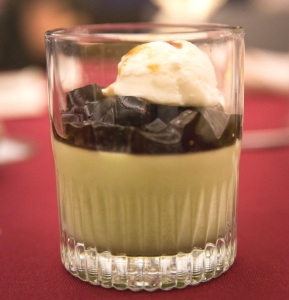 For the panna cotta

Directions:
Soften the gelatin sheets in 2 cups cold water until soft and pliable.

In a saucepot, bring the milk, cream, sugar, matcha powder and gelatin to a simmer. Stir until the sugar is dissolved. Pour the mixture through a fine strainer or chinois.

Remove from heat and divide into four ramekins or martini glasses. Chill in the refrigerator for 4 hours or until chilled.

For the coffee jelly

Directions:
Soften the gelatin sheets in 2 cups of cold water until soft and pliable.

Bring the water, sugar, gelatin and instant coffee to a boil in a stock pot, stir until the sugar and gelatin are dissolved.

Transfer the mixture onto a sheet pan and chill for 2 hours or longer, until the jelly is set and not runny. Cut the chilled coffee jelly into small pieces about ¼-inch square.

To serve: In a serving goblet or ramekin, layer a spoonful of jelly on top of the panna cotta and place a small scoop of vanilla gelato on top.

Fresh Starts Chef Events offers a parade of presentations by celebrity chefs, cookbook authors and artisan producers in The Key Room. Visit the online calendar at http://bit.ly/FSchefevents for upcoming events. Our list of presenters includes luminaries from the worlds of food, wine and restaurants who share stories, demonstrate techniques and offer tips on making the most of our local bounty. You can register online for upcoming classes or call us for more details at 415-382-3363 x243. Proceeds from our events support shelter and job-training programs at Homeward Bound of Marin; learn more at www.hbofm.org and www.thekeyroom.com.
View all posts by Fresh Starts Chef Events →
This entry was posted in Uncategorized. Bookmark the permalink.